Posted on December 30, 2020 Posted By: dalestrattonCategories: Board of Trustees 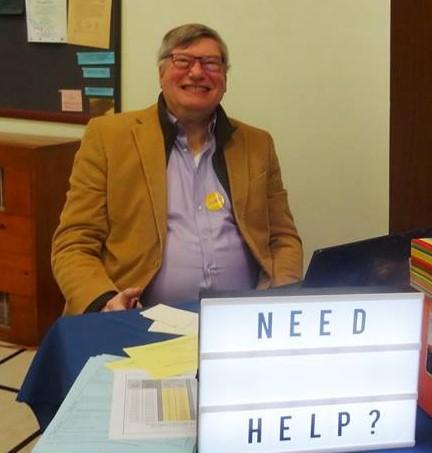 Steve Cohen began serving as Treasurer just before the financial crisis of 2008. Over the next twelve-and-a-half years, he served with distinction, providing sound and reliable financial advice to the Board and initiating many innovations and improvements. In June 2020, he informed the Board that he did not want to stand for re-election, but the Board did not want Steve to go until we had implemented a Finance Committee so that the duties Steve had carried out would be shared among more people. After some gentle arm-twisting, Steve agreed to stay on. With the Finance Committee now established, we accepted his resignation with gratitude for his countless hours of service.
During twelve-and-a-half years as Treasurer, Steve served with seven different ministers, eleven Presidents of the Congregation, and forty different trustees. He issued monthly Treasurer reports at over 140 Board meetings, delivered presentations on the Church’s finances at twelve annual meetings, and made similar presentations at numerous special meetings.
The many initiatives that Steve either led or where he made key contributions are too numerous to mention. They include:
* Securing a PPP loan for the Church.
* Working with the Executive Team to implement an automated system for pledging, including payment by credit card and the GivePlus app.
* Overseeing two successful external audits.
* Spearheading an “audit swap” program with Cherry Hill Unitarian Universalist Church.
* Expanding and reformatting the annual reports to the Congregation.
* Expanding and reformatting the monthly reports to the Board.
Two of Steve’s last acts as Treasurer were particularly important. He trained his successor, Seth Hammonds, and he proposed a version of the Finance Committee structure that the Board has now implemented. As Steve perceived, the job of Treasurer is almost too big for one volunteer to do alone. A dedicated, hard-working, and talented individual like Steve can rise to the challenge, but it is a position that needs more support. It is also important to diversify the number individuals who have institutional knowledge about the Church’s finances.
To address these issues, the Board has established a Finance Committee. Look for more information about the Finance Committee in February, including a presentation during on-line coffee hour.
Fortunately for us, Steve will not be going far. He plans to remain active in the Church, and he will also serve as a consultant to the Finance Committee so that he can pass on the knowledge that he has gained over the years.
Please join us in thanking Steve for twelve-and-half years of outstanding service as Treasurer.