Posted on May 26, 2021 Posted By: dalestrattonCategories: Financial Support 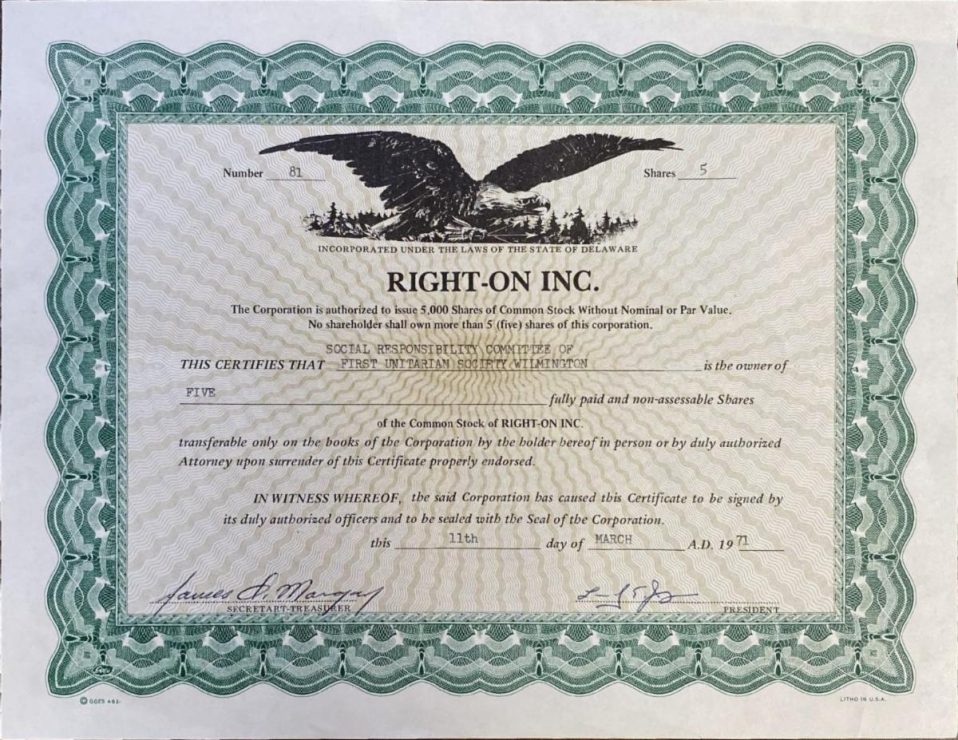 On May 17, Joan Carter was working in our Archives and found an unredeemed stock certificate from 1971 for 5 shares in “Right-On, Inc.” Joan looked up the company in the stock market and found a couple of similarly named companies. Steve Cohen was the office volunteer and he researched the certificate and found that it was not publicly-traded and the certificate was typed onto a document purchased at a stationary store.
The certificate was owned by the Social Responsibility Committee of our Church. Steve checked the Balance Sheets from the early 1970’s in our file room and the stock was not listed as an asset. Checking Newspapers.com solved the mystery.
In 1971, Wilmington community activist, Lemuel Joyner set-up a non-profit company and must have issued shares to donors like our Church. The goal was to build affordable housing on the East Side of Wilmington. The company name was based on a slogan of that era. After 3 years of effort in 1975, it was reported that the land purchased by the non-profit to build 16 three bedroom houses was in a flood plan at the confluence of the Brandywine and Christina Rivers and was ineligible for a federally guaranteed mortgage. Lemuel Joyner was most proud of helping elect Jim Sills as Mayor. He focused on voter registration and helping minority youth. He sadly passed away of a heart attack at age 57 in 1995.
We may not have found any money for the Church but did find our Church trying to make a difference on the East Side 50 years ago.