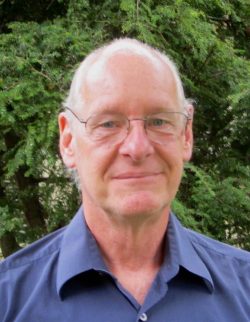 Philip was raised in and served as an acolyte in a traditional Buffalo, New York church before coming to the Delaware Valley in 1966 for college.  He joined DuPont in 1974 and was married at First UU in 1978 to Debbie (nee Washburn) who has deep Unitarian roots.  Their sons are at least ninth generation UU’s. Whitney, Darren, and Evan have participated in many services over the years. Philip joined First UU in 1980 and served as both member and Chairman of the former Property Committee.  He had a brief stint on the Board in 2001 cut short by career changes. Philip serves on the current Buildings and Grounds Committee and helps Debbie with Book Corner.  A few of his past projects include planting perennials around the Route 202 sign, co-chairing an Affirmation Sunday program, replacing the old boiler, and automating the book corner inventory.  He and B&G are currently working on rebuilding the Sanctuary and Parish Hall windows and researching solar energy systems. Philip looks forward to continuing the humanistic expedition by nurturing First UU’s spiritual sanctuary wherein other seekers can safely pursue their own journeys.
Position: Board Trustee