Brief History of the First Unitarian Church of Wilmington 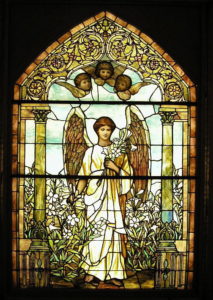 Unitarians  trace their modern roots to the thinkers of the Protestant Reformation.  The scientist, Joseph Priestley, who resided  nearby in Pennsylvania brought the Unitarian faith and philosophy to America where it was first adopted by New England Congregationalism. He is best known for his discovery of oxygen, other gases and soda water.

The Unitarian Universalist Society of Wilmington  came into existence when a group of liberal Christians had conversations about religion and how their understanding of faith could influence their lives.  Those conversations led to the decision of the group to establish our church, the First Unitarian Society of  Wilmington, Delaware.

In February 1866, the first document stated: “The undersigned propose to associate themselves for the purpose of forming and sustaining in the City of Wilmington, a Society of the Unitarian Faith, and to take the earliest practicable measures therefore…”

Meetings took place downtown, in the Scientific Hall of the Wilmington Institute, in the same building as the library at 8th and Market Streets. With the help of the American Unitarian Association and other churches located near by, a steady growth of this society prompted the building of a church in 1867, on 8th and West Streets.  With a wrought iron cross on the steeple and the sign “First Unitarian Church,” the red brick building on West Street was completed in 1868.

Several ministers helped the dedicated congregational members deepen their faith, educate their children and become a caring force in the community by putting their faith in action.  The Rev. William A. Vrooman helped organize and maintain the Prisoner’s Aid Society. The  growth came partly from Unitarians being transferred to Wilmington with the railroad and from Quakers looking for a more liberal approach to religion.

The Rev. John G. MacKinnon’s philosophical lectures found an audience hungry for an intellectual approach to religion. This attracted many new members.  Rev. MacKinnon also helped to establish a series of forums with renowned scientists as speakers.  In 1955, the 24 members of a dinner discussion group in Newark decided that, with the help of the Wilmington Church, they could organize their own congregation.  Dinner discussion groups also led to the formation of the West Chester congregation.  The Wilmington congregation also voted to make a loan to the Delaware County Congregation in Springfield, Pennsylvania to help it to grow.

Growth of the Wilmington Congregation continued which made it necessary to seek a larger venue to accommodate the many new members. The present church building was built in 1960 in Sharpley.  Since the arts played a large role in church life, the structure of the building and its doors reflect much about who we were in the late 1950’s, early 1960’s. The architects designed the interlocking of two triangles with the entrance at the area of intersection as a symbol of the belief that “Man’s pursuits of understanding and fellowship are closely related to his services of devotion…”

The original entrance doors for the Sharpley building greeted worshippers with quotes from two distinguished Unitarians:

“I call that mind free which has cast off all fear but that of wrongdoing, and possesses itself though all else be lost”.
William Ellery Channing

“I have sworn upon the altar of God eternal hostility against any form of tyranny over the mind of men.”
Thomas Jefferson

In 2019, the congregation upgraded the main entrance doors to improve accessibility. The original doors are now on display in our Parish Hall.

Universalists, who stressed reason in practicing their religion, became an organized movement in America in the mid 18th century.  They thought it impossible that God would allow salvation only selectively.  They agreed with many Unitarian statements of faith.  After much discussion the Universalist and Unitarian Churches were able to propose a merger.  After extensive debate, our church supported this merger.  As of February 28, 1960, we became a member of The Unitarian Universalist Association.  (UUA)

During the decade of the 60’s and the 70’s, when our country was steeped in the civil rights and women’s rights movements, and antiwar demonstrations came to a peak, our church participated in important events. The church grew  to be a strong voice for liberal religion in the Greater Wilmington area. The church sponsored forums for candidates seeking public office and held other public programs of community interest.

Many changes occurred from 1960 to 2015. The Church School was bursting at the seams so a new educational wing was added. With capable professional and lay leadership, our original goals stayed with us, strong and solid. We have given strong support for groups that organized congregations in Mill Creek, South Jersey, Southern Delaware and Central Delaware. We have continued to strive for what our founders advocated, namely, liberal religious pursuit for all ages, the constant search for truth and justice, caring for congregants, being a welcoming congregation and reaching out to the larger community.  We feel that it is important to have our religious beliefs lead us to action, to help in our work to make our community and our world a better place for all.

Click here to view our full story, “150 Years of History, Roots and Branches.” Printed copies are available in the church office