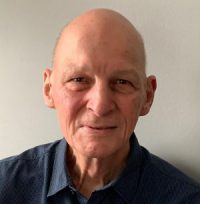 Ed has been a member of First Unitarian Church since the fall of 2014. He spent decades active in Presbyterian congregations, but felt something was missing. Finding Unitarian Universalism has been a spiritual homecoming. He was a member of our recent pastor search
committee and currently serves as a Worship Associate, member of the EDR team and actively participates in one of our Soul Matters
groups.
After retirement in 2013, Ed and his wife Darlene wanted to experience living in a small city and moved to Wilmington. They chose an old rowhouse in West Center City on a street with a strong neighborhood connection. His involvement in the community includes The Coalition to Dismantle the New Jim Crow, Peace Week Delaware, Non-Violent Wilmington and as a volunteer with Read In/Read Out, a program of the Delaware Center for Justice at Howard R. Young Correctional facility. Ed also serves on the board of La Escuela de la Montana, a language school in the highlands of Guatemala.
He was raised in northern New Jersey and graduated from Central College in Pella, Iowa. After college he taught secondary social studies in Iowa and New Jersey, which Ed still thinks was one of his best jobs. Teaching was followed by various management positions in the insurance industry. He retired from a career with a receivable management outsourcing company where he was responsible for its North American real estate. Ed enjoys reading history, following sports and has been baking bread for his family for 40 plus years. In addition, he misses and looks forward to traveling again, especially visiting his young grandchildren in Oregon and Mexico.