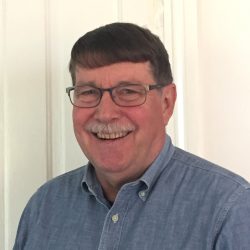 Jeff Lott is a writer, editor, graphic artist, and activist. He finds inspiration for his social justice work in many sources, particularly in the rational and compassionate principles of Unitarian Universalism. Jeff served on the board of trustees from 2008 to 2014, including a term as president during a time of ministerial transition. As a board member, he led the yearlong “Mission Possible” process in 2011–12, which wrote the church’s current values, mission, and ends statements. In 2014, he worked with former Assistant Minister Rev. Michelle Collins to lead a daylong Social Justice Action Summit for church members, with the aim of re-energizing First U’s justice work. Also in 2014, Jeff launched the First U Social Justice Connector, a blog about justice work at the church and in community. More recently, he was instrumental in establishing new social justice task forces within the church. Jeff has been a leader of Delaware’s Movement for a Culture of Peace and is co-founder of Peace Week Delaware, a statewide effort for peace and justice. Jeff has also traveled throughout Southeast Asia, including six stints as a volunteer house builder in rural Cambodia.