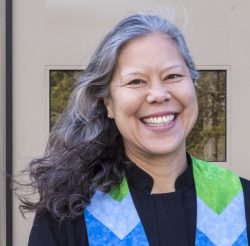 Rev. Wat resigned effective June 30, 2021. Rev. Wat served the Denton, Texas, Unitarian Universalist Fellowship from 2010 until 2018, first as a contract minister and
then as the fellowship’s first called minister in its 64-year history. She led the Denton congregation, situated in a northern suburb of Dallas–Fort Worth, through a period of significant growth and a time of rebuilding and recovery after a devastating fire.
Rev. Wat received a Master of Divinity degree from the San Francisco Theological Seminary in 2005, where she served as coordinator for the Racial/Ethnic Advisory Committee. Following seminary, she served as a hospice chaplain in Delaware and Texas until 2009, when she became a ministerial intern at Community Unitarian Universalist Church in Plano, Texas. Rev. Wat was ordained by Pathways Unitarian Universalist Church in Hurst, TX, in 2010.
Unitarian Universalist ministry is a second career for Rev. Wat. After receiving a Bachelor of Fine Arts degree with a concentration in dance from Kutztown University in 1994, she moved to California to pursue a Master of Arts in Creative/Interdisciplinary Arts at San Francisco State University—a unique program aimed at using creative arts
to promote social justice. From 1997 to 2002, she served as executive assistant for Shelter Network, Burlingame, CA, a $3.8 million nonprofit homeless service agency.
While at Shelter Network, she helped to organize a $10.75 million capital campaign and helped to build and open two new program sites for the homeless.